Which seems to be my chief complaint, as far as the SCA and my participation goes.

That is, I have changed my persona twice, and have changed names four times. I believe I’ll stick with the one I’ve got, but you never know.

Currently I am in the midst of what could be a really spectacular A&S project. I hope that it will keep on going until I get it done, but I am easily distracted by other projects (like printing), so who knows? I am going to be diligent and finish, though.

The project I’m working on isn’t this, but it’s a plain version of it (I am so not ready for the real, total version yet): 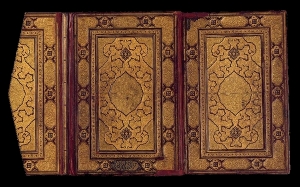 As you can see, it’s elaborately gilded and tooled. I can’t do any of that yet, but I’ve started working on cutting the folios for the interior, and am attempting to source book boards (I want to use wood, though pasteboard is period in some instances; I will do my test bindings using pasteboard). So far, I’ve had good momentum and there’s actually quite a bit of primary and secondary source material available (woo; makes up for the frustration of extant Indian objects, in that there are few). Tomorrow is an outing to purchase leather and colored linen thread for the cover and endbands. I’m shooting for Magna Faire as the initial A&S entry. Now I’ve told you and so I have to do it, right?

The main distraction at the moment is the socks that always want knitting, since there seems to be an endless supply of patterns and yarn and inspiration. There is always Wednesday business meetings and the occasional Knitch Sunday, I suppose.

By day, I'm a graphic designer. By night, I'm a knitter. I'm doing my part to keep Hotlanta stylish. I imagine that if you don't already understand the title of the blog, you're probably confused and perhaps slightly annoyed, but never fear - I do have a reason (and it's a good one). Having gone to hear Stephanie Pearl McPhee, and then having been inspired to blog about knitting, I found myself wondering what to call the blog. I recalled a conversation I had with Mouse and the Chicken Goddess about why it is a Bad Idea to anger knitters - this conversation was following SPM, aka the Yarn Harlot telling the assembled throng about Those Who Do Not Understand Knitting and Therefore Belittle It Much to the Chagrin of Others, or TWDNUKTBMCO, which is not the acronym she used but is the one I'm using because I forgot hers - that is, we are numerous and we all have very pointy sticks, easily transforming into an angry mob. Therefore, knitters = angry mob.
View all posts by HappyGoth →
This entry was posted in knitting, sca and tagged art, bookbinding, books, crafts, knitting, persia, sca. Bookmark the permalink.