Sorry for no DragonCon posts – I’m still sorting through photos.

However, Red Tower this weekend was an excellent success, and the South Downs has a rockin’ new Baron and Baroness (one of whom is Blogless Lea) and there was a great feast and a hafla and an abundance of awesome out-of-kingdom guests.

Because I can’t possibly post all the awesome photos of the equally awesome event, here’s a good sampling: Red Tower 2010

robbingpeter made a “sugar” elephant with a little candy-filled howdah on its back. She documented the process. It was really hard not to tell people about this:

The only downsides were the hot weather and a sudden explosion of ticks and scorpions (I dealt mostly with the former). But those were minor, and I spent a lot of time in the kitchen, which is where I like to be, except for a brief break during which I was brought into the Order of the Red Raven (and was completely floored by the whole thing, having not expected it). Hajji did the illumination himself! I am so attached to the scrolls created by friends. They’re almost better than the actual awards. I know the friends are.

Anyway, the kitchen was awesome, and during brief periods we looked very authentic:

I was personally responsibly for wrapping a great quantity of samosas, which the soon-to-be-elevated Temair (to the far right) and my apprentice brother Jareth are frying in this photo: 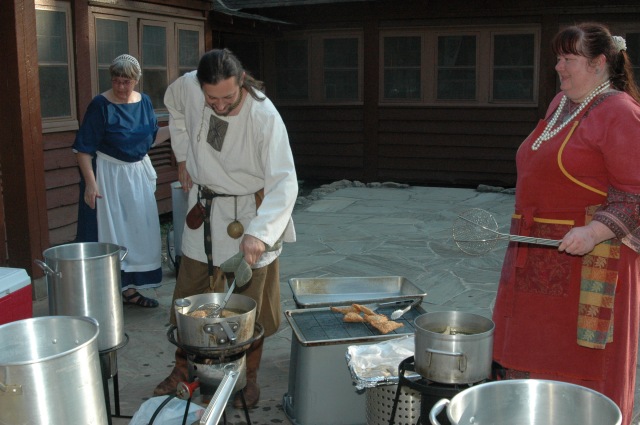 (All the food was delicious, but these were a big hit.)

I didn’t have any kitchen garb, so I made some.

is a princess (yeah, I know I’m not a princess but the garment is parallel to what I need and the materials I had on hand) in a purple angharka and yellow salwar. I had some yellow salwar already, and a quantity of eggplant fabric, and lo she’s got short sleeves! So I used my magic pattern and came up with this:

(Apologies to Yul; he was working at the Hobart dishwasher all day,  and so his front was perpetually wet.) The plan in the future is to make some blue salwar and a red angharka in a finer fabric, and keep this one for very special occasions. If I can find photos of the front I’ll send them along. I also realize that I need way more jewelry, but jewelry and kitchen aren’t exactly the best combo, so there will be other and better photos in the future. And also I’m nearly to the point of sharing this pattern (I’m going to enter it in an A&S competition in the very near future, so I’d like to wait until after that).

My biggest accomplishments of the weekend were performing a puja in honor of Mistress Jadi’s impending Baroncy, making some really excellent new friends (and being an enabler for a brand new/expanding sari stash) and putting the chickengoddess into this outfit:

My thanks to thetripper for the photos. And also to Meenakshi, whose sari paper gave me the knowledge to pull off such a rockin’ outfit for Her Chickenness.

But you know what? I’m really really thankful for air conditioning.

By day, I'm a graphic designer. By night, I'm a knitter. I'm doing my part to keep Hotlanta stylish. I imagine that if you don't already understand the title of the blog, you're probably confused and perhaps slightly annoyed, but never fear - I do have a reason (and it's a good one). Having gone to hear Stephanie Pearl McPhee, and then having been inspired to blog about knitting, I found myself wondering what to call the blog. I recalled a conversation I had with Mouse and the Chicken Goddess about why it is a Bad Idea to anger knitters - this conversation was following SPM, aka the Yarn Harlot telling the assembled throng about Those Who Do Not Understand Knitting and Therefore Belittle It Much to the Chagrin of Others, or TWDNUKTBMCO, which is not the acronym she used but is the one I'm using because I forgot hers - that is, we are numerous and we all have very pointy sticks, easily transforming into an angry mob. Therefore, knitters = angry mob.
View all posts by HappyGoth →
This entry was posted in india, sca and tagged cooking, costume, event, india, investiture, mughal, red tower 2010, sari, sewing. Bookmark the permalink.