So with the block completed, the block is ready for covering. Which is infinitely more difficult than I had anticipated. European-style binders, I respect you in new ways now.

Anyway, first came lacing the covers onto the block, via the leather sewing supports:

You can also see the placement of the pegs, which help keep the supports in place. Also you can see where one of the endband cords has been threaded into the block and (presumably) glued to the inside face of the cover board.

And then you do that for all the supports, trimming the leather flush when done:

I used a very small, fine file to smooth out the surface when I was done. Another step that one is supposed to complete is to plaster the inside with gesso, but I cannot figure out how to get it to be the correct consistency, so that’s a step that will have to wait until the next book, when I have a little more time to experiment.

Anyway, so then you cut a little spine lining piece, and if you have time to go to the specialty hardware store that is only open during the times when you cannot go, you buy hide glue and glue the piece of parchment to your spine, forming a support. Instead, I used wheat paste, which I found some reference to in my sources, but which does not work as nicely as the other glue might (or so I am led to believe. Anyway, here’s what the spine piece looks like:

And glued in place over the boards: 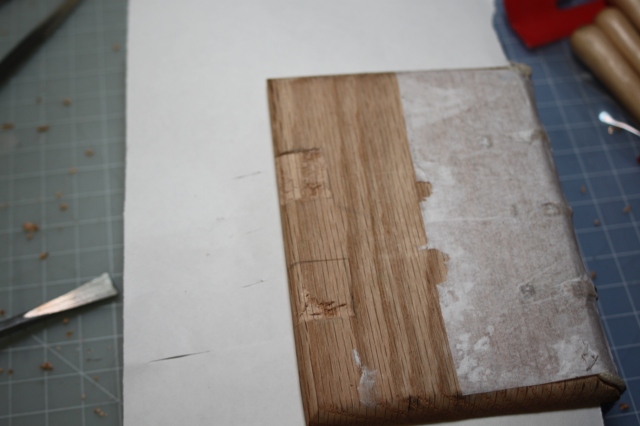 You can see two extra things in this picture: one, that the fake parchment isn’t ideal (but will work in a pinch) and two, that I carved out channels for the straps to go into, so they wouldn’t show too badly under the covering leather.

Here are the straps, affixed to the book:

These were a major PITA to get to stay in place. I even scored both the leather and wood beforehand! Aargh. I had to re-glue them at least four times before they took.

I did some more jugaad with a utility knife and a scrap of marble from a surplus store, and skived leather strips to use to cover the flap end of the book. Like so: 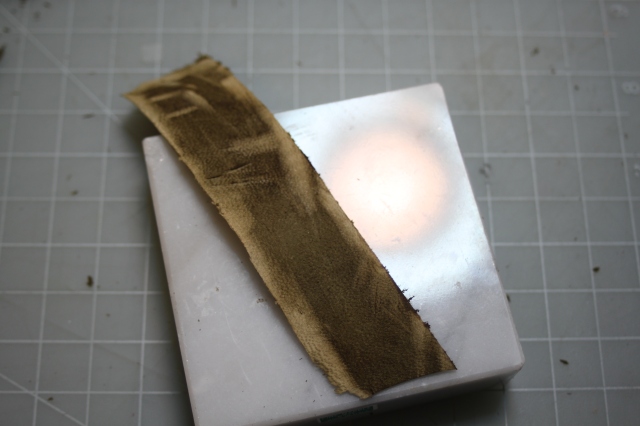 Further note to save you trouble: using a long, breakaway-style utility knife blade without the handle because you bought the wrong sized blades? Not the easiest thing. Using said blade with the handle? MUCH BETTER. I have yet to figure out a good tool to use for hand-skiving, but when I do, I will let you know. I like to share knowledge.

Here are the strips, glued in place:

So then came the gluing of the actual cover, which involved a tricky bit of cutting little slits for the straps (and then gluing them in place YET AGAIN). 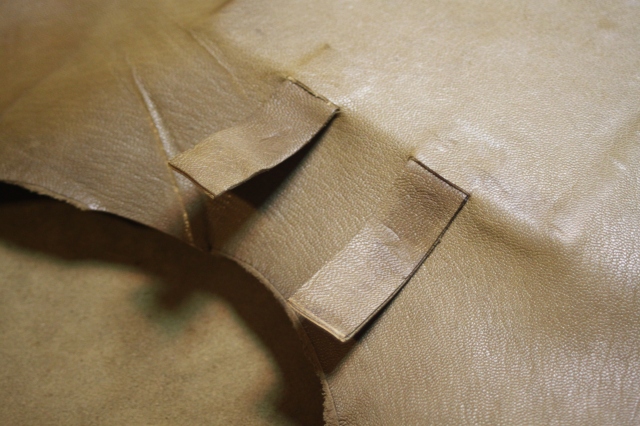 Not too shabby, in the end. 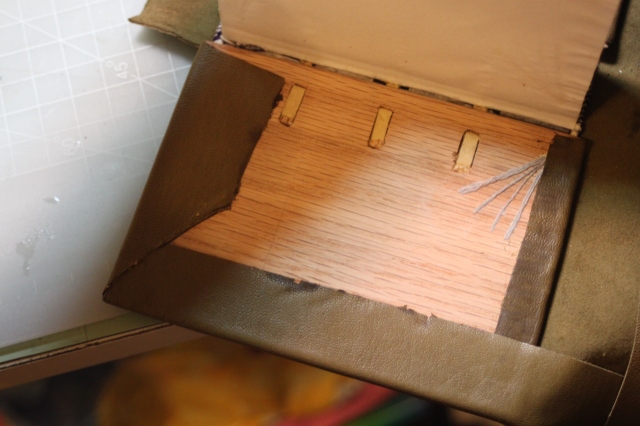 Yeah, I probably could have made those more even, but I ended up covering them anyway, so whatever.

The headband tuck (I’m particularly proud of this): 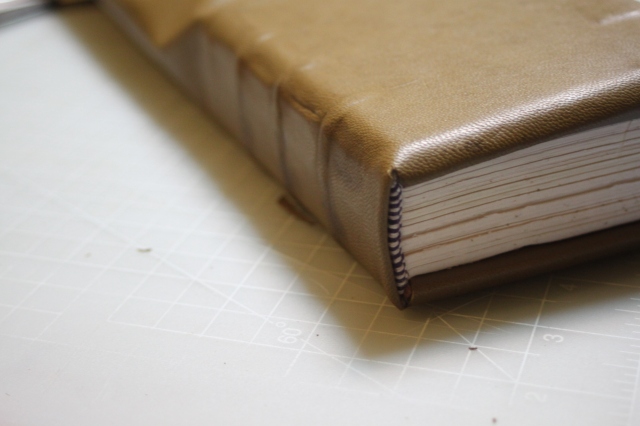 And then I stuck the whole shebang into a press with linen thread tied around the spine to get nice, crisp cord definition:

And that’s the end of that day, as I left it overnight and into the next evening so it could dry.

Tomorrow is the final bits – the brass fittings, flap, endleaves and knot.

By day, I'm a graphic designer. By night, I'm a knitter. I'm doing my part to keep Hotlanta stylish. I imagine that if you don't already understand the title of the blog, you're probably confused and perhaps slightly annoyed, but never fear - I do have a reason (and it's a good one). Having gone to hear Stephanie Pearl McPhee, and then having been inspired to blog about knitting, I found myself wondering what to call the blog. I recalled a conversation I had with Mouse and the Chicken Goddess about why it is a Bad Idea to anger knitters - this conversation was following SPM, aka the Yarn Harlot telling the assembled throng about Those Who Do Not Understand Knitting and Therefore Belittle It Much to the Chagrin of Others, or TWDNUKTBMCO, which is not the acronym she used but is the one I'm using because I forgot hers - that is, we are numerous and we all have very pointy sticks, easily transforming into an angry mob. Therefore, knitters = angry mob.
View all posts by HappyGoth →
This entry was posted in book, bookbinding, medieval, sca and tagged book, bookbinding, craft, gothic, medieval, sca. Bookmark the permalink.