The softest of owls

I didn’t finish my  book before Kingdom A&S. I had very noble intentions! And I worked very hard! But the book became a book display, and while I got some flack for entering it in the open (hello, personal standards and unfinished documentation), I didn’t do too badly. I won the populace vote and also the children’s vote (which, honestly, is one of the coolest awards I’ve ever gotten). I also got a couple of “This is so cool! I want to bind books!” That makes it all worth it. I didn’t get my own photos of the display, but I did get these photos from a friend on Facebook: 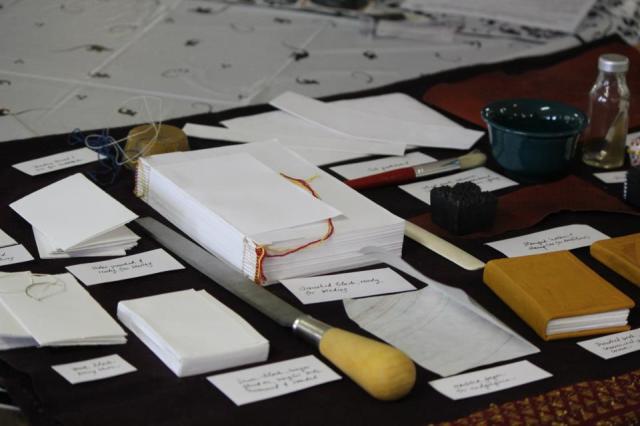 It’s the most extensive A&S entry I’ve ever done, and will definitely be an actual judged entry next time. I really enjoyed sharing all the parts of the process with other people, and the extra time I’m taking will allow me to experiment with shell gold, thus making this even more authentic than the last book (the black and gold one in the display).

And what’s more, I’m doing one-on-one classes with Myra, who is an excellent student. I can’t wait to teach her the tooling part. That’s my favorite.

Then there was talking and shadow judging and some Royal attending (which I think I managed to botch in a pretty spectacular manner, but lessons learned, boy howdy), and then I got called up for winning the A&S Open, and then His Majesty called up the Order of the Velvet Owl, and I was quite totally shocked (both His Majesty and Her Highness commented on the state of my face due to said shock), and then there was a lot of hugging, and I wished that I hadn’t worn my jingly anklets in court, for lo, they are loud.

I was in shock for another couple of days, which wore off and was replaced by bubbly joy.

I have an OVO.

I received this little beaded pouch, which contained a surprise medallion on a kumihimo cord (I suspect Mistress Margala in the medallion department):

A close-up of the pendant:

And Master Lorenzo and Mistress Adela, who are spectacular human beings, made this scroll for me:

So cool! They included a little special detail:

That’s me, holding a book press, on the back of the Meridian horse, riding away from a sleeping Middle Kingdom dragon. So incredibly cool.

And this also means I can judge A&S entries now, which is equally cool.

Thanks, Meridies. I’ve lived in a few kingdoms now, and I can confidently say that you feel the most like home.

(And since I was curious, I looked up “velvet owl” to see if there was such a bird, and there is not, although searching brings up Birds of Afghanistan and the awards listing on the Meridian website. Appropriate.)

By day, I'm a graphic designer. By night, I'm a knitter. I'm doing my part to keep Hotlanta stylish. I imagine that if you don't already understand the title of the blog, you're probably confused and perhaps slightly annoyed, but never fear - I do have a reason (and it's a good one). Having gone to hear Stephanie Pearl McPhee, and then having been inspired to blog about knitting, I found myself wondering what to call the blog. I recalled a conversation I had with Mouse and the Chicken Goddess about why it is a Bad Idea to anger knitters - this conversation was following SPM, aka the Yarn Harlot telling the assembled throng about Those Who Do Not Understand Knitting and Therefore Belittle It Much to the Chagrin of Others, or TWDNUKTBMCO, which is not the acronym she used but is the one I'm using because I forgot hers - that is, we are numerous and we all have very pointy sticks, easily transforming into an angry mob. Therefore, knitters = angry mob.
View all posts by HappyGoth →
This entry was posted in bookbinding, medieval, sca and tagged arts, arts and sciences, bookbinding, books, islamic books, Kingdom A&S 2012, meridies. Bookmark the permalink.

2 Responses to The softest of owls