One of the awesome things about the place I work is this rockin’ Secret Santa thing we do. It’s a cheapie sort of thing, money-wise, but the gifts are anything but cheap. This year I drew Allison’s name, and since we hang out relatively frequently, I knew pretty much what to make her.

She saw a headband at Beehive that was way outside of the gift budget, but totally something I could make. (But sadly could not remember to photograph.)

And then she casually mentioned at the cookie swap (another, far more gluttonous, holiday tradition) that she missed the cracker toffee cookies I’d made previous years, and that she’d be okay with a whole batch anytime. So that’s the other thing I made.

I won the lottery, as far as folks who could draw my name. The amazing Dawn of the Gahan Girls! I swear, it was the best thing ever. I had gone on her blog the night before, just for reading (I love to see what she’s up to) and saw this gorgeous poinsettia 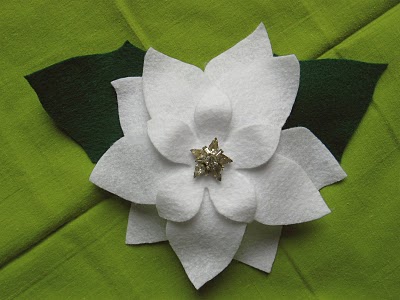 and was sort of salivating over it all morning, so of course I knew who’d made my gift. 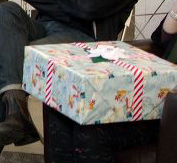 However, I never could’ve anticipated the gift itself. How rockin’ is this thing? 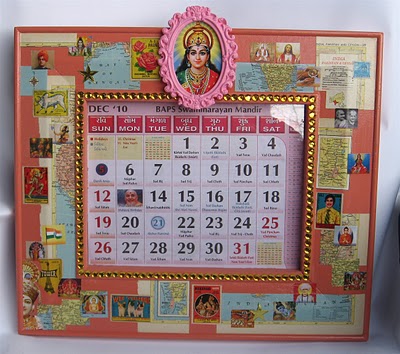 [All photos taken by Dawn herself. Well, except for the tiny cropped one. That one is Naugle’s]

Dawn made a detailed blog post about the whole business. I feel so loved! And also pretty giddy about her Lakshmi comment (apparently my effort at Indian-ness has been moderately successful)!

By day, I'm a graphic designer. By night, I'm a knitter. I'm doing my part to keep Hotlanta stylish. I imagine that if you don't already understand the title of the blog, you're probably confused and perhaps slightly annoyed, but never fear - I do have a reason (and it's a good one). Having gone to hear Stephanie Pearl McPhee, and then having been inspired to blog about knitting, I found myself wondering what to call the blog. I recalled a conversation I had with Mouse and the Chicken Goddess about why it is a Bad Idea to anger knitters - this conversation was following SPM, aka the Yarn Harlot telling the assembled throng about Those Who Do Not Understand Knitting and Therefore Belittle It Much to the Chagrin of Others, or TWDNUKTBMCO, which is not the acronym she used but is the one I'm using because I forgot hers - that is, we are numerous and we all have very pointy sticks, easily transforming into an angry mob. Therefore, knitters = angry mob.
View all posts by HappyGoth →
This entry was posted in Cool things, General stuff and tagged christmas, crafts, friends, gifts, lakshmi, work. Bookmark the permalink.