I can has nap?

I don’t have anything worth showing off, other than wearing the green sari to a work party (I felt elegant all day), and since I can’t find photos of that I guess I don’t have it to show off, either.

That is not to say that I haven’t been busy. Work has been kicking my butt lately, so I’m in go-home-and-collapse mode. I fear I’m forgetting what little Hindi I’ve learned, since I haven’t been able to practice for the past few days, and will be unlikely to get much chance until the holidays (when my practice time will be questionable, at best).

But I have a big lump of fabric in my dining room, and that lump attests to a joint creative effort between Lea and myself, which will ultimately yield something like this: 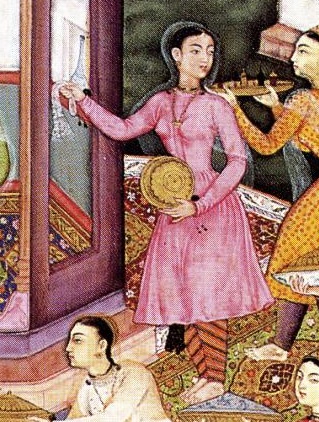 Only in red silk. I think I’m going to try to replicate the stripey pants, though.

We built it from a kind of Mongolian coat, which has similar construction (plus some modification) and a similar shape. We’ve made this garment a lot more fitted and there will be a gathered skirt all the way  around, instead of only at the gores. The sleeves are also going to be a lot more fitted than the model coat. This means that the underarms are poofier than I’d like, but the lady in the miniature appears to have poofy underarms, and I’d really like to have more than 30 degrees of movement in my arms.

So far, I have a bunch of cotton rectangles, and I’m a little closer to getting the fit I want. I will not be done in time for Castle Wars, so I’m doing the Persian thing for that. I should be done by 12th Night, though, and will subsequently have cool-weather garb for most of the winter. I also have to do an underthing, which probably didn’t exist for the original outfit, but which will help with warmth-retention. I will most likely make several of these and do some in cotton for the not-so-cool-but-still-not-warm seasons. My current garb is rather impractical for a Georgia winter, I have come to discover.

Oh! And also, there is this really excellent thing I found, which motivates me a little more to do my chaupar/pachisi board that I’ve been planning:

The absolute best part of this is the chaupar charpoys. They have pockets for the game pieces. With a little ingenuity and some experimentation, I think I can come up with a reasonable facsimile for field-side seating. I would buy one of these, but I don’t have $1500 (I would have one right now if I did, though).

By day, I'm a graphic designer. By night, I'm a knitter. I'm doing my part to keep Hotlanta stylish. I imagine that if you don't already understand the title of the blog, you're probably confused and perhaps slightly annoyed, but never fear - I do have a reason (and it's a good one). Having gone to hear Stephanie Pearl McPhee, and then having been inspired to blog about knitting, I found myself wondering what to call the blog. I recalled a conversation I had with Mouse and the Chicken Goddess about why it is a Bad Idea to anger knitters - this conversation was following SPM, aka the Yarn Harlot telling the assembled throng about Those Who Do Not Understand Knitting and Therefore Belittle It Much to the Chagrin of Others, or TWDNUKTBMCO, which is not the acronym she used but is the one I'm using because I forgot hers - that is, we are numerous and we all have very pointy sticks, easily transforming into an angry mob. Therefore, knitters = angry mob.
View all posts by HappyGoth →
This entry was posted in sca and tagged costuming, crafts, garb, india, mughal, sca, sewing. Bookmark the permalink.

4 Responses to I can has nap?