In which I shock all y’all, because I

Three is by far the most significant because I’ve been suffering from some wristy nervy tendony issues for the past two years, and have not knit anything significant since then. My dear friend who knits in Colorado is also a massage therapist (hi, friend!) and lo and behold, her handiwork allowed me to finish these suckers: 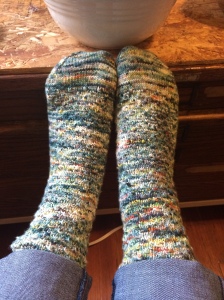 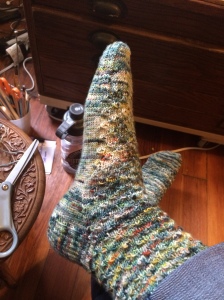 The pattern is Wollmeise Socks from the Loopy Ewe, and the yarn is from Creatively Dyed yarns. I forget the colorway, but it’s the superwash merino sock yarn. I have a hoard of CD yarns that I’m hanging on to for the perfect project. It looks like you can still get the yarn online? More power to you and your online shopping.

Emboldened by this victory, I’ve started on Banyan Tree Socks, also by the Loopy Ewe. I’m knitting it up in Dragonfly Fibers golden pear djinni, which appears to be made exactly for these socks. It’s lovely. I’m on row 10! Yay!

So there’s that! And also SCA stuff like being elevated to the Laurel but that’s another, far longer post.

By day, I'm a graphic designer. By night, I'm a knitter. I'm doing my part to keep Hotlanta stylish. I imagine that if you don't already understand the title of the blog, you're probably confused and perhaps slightly annoyed, but never fear - I do have a reason (and it's a good one). Having gone to hear Stephanie Pearl McPhee, and then having been inspired to blog about knitting, I found myself wondering what to call the blog. I recalled a conversation I had with Mouse and the Chicken Goddess about why it is a Bad Idea to anger knitters - this conversation was following SPM, aka the Yarn Harlot telling the assembled throng about Those Who Do Not Understand Knitting and Therefore Belittle It Much to the Chagrin of Others, or TWDNUKTBMCO, which is not the acronym she used but is the one I'm using because I forgot hers - that is, we are numerous and we all have very pointy sticks, easily transforming into an angry mob. Therefore, knitters = angry mob.
View all posts by HappyGoth →
This entry was posted in crafts, knitting, socks. Bookmark the permalink.