I will get back to blogging, but my life went KABOOM and now I have no time and did I mention FarScape (I think I did, repeatedly), so there you go.

It has seriously sapped all my blog energy, and by it I mean Twitter, not Hrithik Roshan being on twitter.

And then, I made some garb and here are some pictures of it, but not of the whole thing:

Mostly the dupatta in this picture, which is lovely and not something I made. But I look not bad here, so it’s up. There in the background are my lovely assistant, Don (Don don don don) and His Excellency, Baron Cathal.

Another view, with some of my shiny shiny silk outfit. One of the rare times the dupatta actually stayed on my head (I have not gotten the hang of this). Also here are Guillaume and family, Don, His Excellency, Belthora, and a gentleman whose name I cannot remember (but I think it’s Geoffrey). 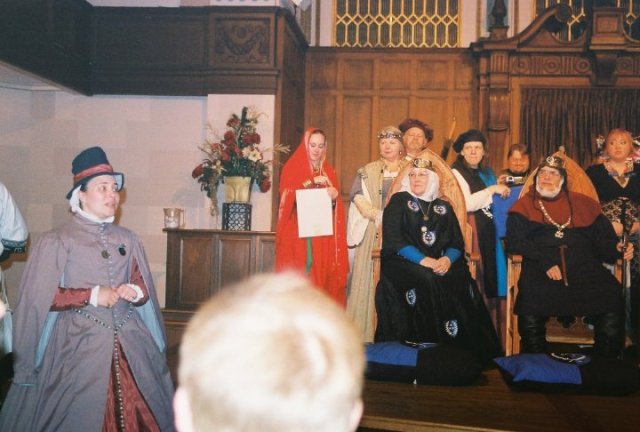 Standing with Their Excellencies after being named Baronial Art and Science Champion. I thin I had stopped weeping uncontrollably at this point. My pants are hidden behind that gentleman’s head. I will have to put on the outfit just for a photo. Also here are THL Andreva, who is making an announcement (and has an awesome hat), Their Excellencies, a Mistress of the Laurelate (whose name I forget, but who I do remember is a Laurel!), THL Mikal Isernfocar, Lady Lucia, and Maya (who probably has a title, too, but I can’t remember it). And another person with a camera who I do not know.

And this is before that other picture, when I was remembering being reminded to curtsy to Their Majesties and Her Highness, and apparently my weeping had Her Majesty weeping, as well. Score.

Dang, that outfit is shiny. Yessssssss.

[All photos taken by CW Merk, who goes by Bjorn in the SCA, and is thoroughly excellent.]

By day, I'm a graphic designer. By night, I'm a knitter. I'm doing my part to keep Hotlanta stylish. I imagine that if you don't already understand the title of the blog, you're probably confused and perhaps slightly annoyed, but never fear - I do have a reason (and it's a good one). Having gone to hear Stephanie Pearl McPhee, and then having been inspired to blog about knitting, I found myself wondering what to call the blog. I recalled a conversation I had with Mouse and the Chicken Goddess about why it is a Bad Idea to anger knitters - this conversation was following SPM, aka the Yarn Harlot telling the assembled throng about Those Who Do Not Understand Knitting and Therefore Belittle It Much to the Chagrin of Others, or TWDNUKTBMCO, which is not the acronym she used but is the one I'm using because I forgot hers - that is, we are numerous and we all have very pointy sticks, easily transforming into an angry mob. Therefore, knitters = angry mob.
View all posts by HappyGoth →
This entry was posted in Cool things, india, sca and tagged A&S, awards, bollywood, costuming, events, garb, midwinter, sca, twitter. Bookmark the permalink.

3 Responses to So busy